International Mediator Colleagues at the World Climate Conference 2009 in Copenhagen

“If you want to build a ship, don’t drum up the men to gather wood, divide the work, and give orders. Instead, teach them to yearn for the vast and endless sea.”

“Institute for Mediation and Life Management” 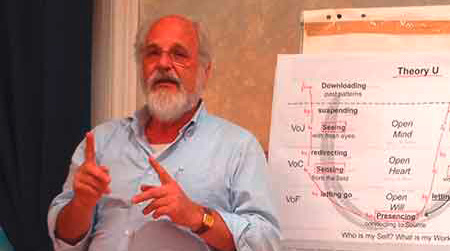 My efforts to think and act in a holistic manner also include the challenge of doing justice to the science. This applies both to the work on individual themes as well as for the overall perspective.

Such a thought process is the focus of my Institute for Mediation and Life Management which is currently being formed. The Institute’s stated purpose focuses on cooperation and co-creation. Its attitude is the invitation to (creation of) commonality.

Let’s take the English term for Einladung (invitation) and analyse its Latin roots: in vita = in/into life. Thus, let’s jointly enter into life and/or act jointly in life. In order to do this, the institute is supposed to formulate suitable requirements. The institute’s motto can be formulated as follows in English:
in-vita-tion to co-operation and co-creation.

Problems of Our Time / Time Problems / Concept of TIME

Adapting to One Another / Transient Oscillation – a Problem? 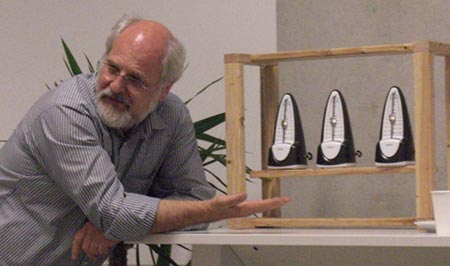 A small experiment with three metronomes provides an opportunity to discuss various aspects via this type of metaphor: Adapting to one another/“transient oscillation”; power of “self-synchronisation”; importance for the work approach of mediation; importance for the project work and/or team-building; “entrainment”, etc.

Because the metronome experiment deals with (pendulum) speeds, an arc is simultaneously being created to one of my main themes/main subjects which I have analysed for a long time and I am currently working on. “Plea for a New Concept of TIME”

I will only refer to this briefly here: Frequently, one can hear: “I live quite consciously in the present, in the “here and now”; only the present is important to me.” The tenor of a required justification would be accordingly: “The past is over and can no longer be changed. The future is not yet here; let’s see what it will bring us. Thus, I live exclusively in the present.”

When discussing that aspect, ask your conversational partner to once again pronounce present or now and ask him: “What have you just said?” You can then still add: “Your present which applies exclusively to you is already over again and has become a part of the past before you even finished the word present. Where is thus your present? Supposedly, the past no longer exists and the future does not exist yet. Thus, where is TIME? Does it even exist at all?”

This is what it is about for me: While focusing exclusively on the so-called “present”, the so-called “past” is on the one hand flippantly dismissed as being “over and cannot be changed” (thus, that it no longer exists and is therefore insignificant?) – and on the other hand the so-called “future” which must still be waited for (not yet even in creation?). With such an attitude, on the one hand the acknowledgment of and respect for such valuable accomplishments from the “past” is lost as well as on the other hand a concept of our responsibility for the “future” is also forfeited. Only one thing would remain: “Me and my present!”

What we need for our lives, for our “human-appropriate” actions, are knowledge, understanding and acknowledgment. This equally requires a view of the “present”, the “no-longer” and the “not-yet”, with a collective view of the past, present and future.

I would like to–making reference to my logo “in-between”/“in the middle of polarity”–not wish for my “anthropology of the in-between” to be construed in such a manner that we should flippantly dismiss the “no-longer” as well as the “not-yet” in order to make the “in-between” experienceable/realisable for us as the present. Quite in contrast, we should embrace and unite/merge/conjoin both of the aforementioned poles.

Based upon the path towards “multi-dimensionality in s p a c e” (we see and understand the world around us spatially in 3-D), I am endeavouring to also see TIME as being “multi-dimensional” and to understand TIME as being “3-D TIME”. With Dr. Charles Savage and our friends, as the depiction model for the spatial overview of the three time aspects, we use the “VENN Diagramme” of three overlapping circles which is applied in mathematics (e. g. in set theory): 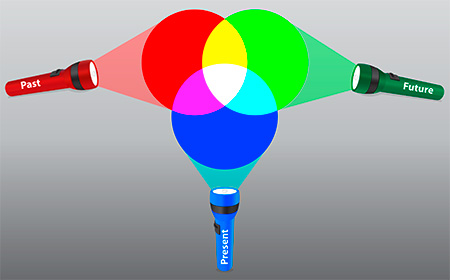 We describe the creative vibrancy of such a TIME model with a word creation derived from it by our speaking (in English) of “VENNergy” and/or of “VENNergizing TIME”.